1. What is the part/role of the non-banking financial sector in the Republic of North Macedonia?

The financial sector in Macedonia is bank-centric, ie banks have a dominant position in it. However, in the last few years there has been a change in the structure in the direction of increased participation of the mandatory pension funds, but also of other financial institutions. According to the data from the latest Financial Stability Report of 2019 of the National Bank, banks participate with 81.4% in the total assets of the financial system, followed by the mandatory pension funds with 11.2%. The non-life and life insurance companies participate with 2.3% and 1.2%, respectively. What is evident in the last few years is the growth of the share of investment funds up to 1.3% and financial companies up to 0.6% of the total assets of the financial system. 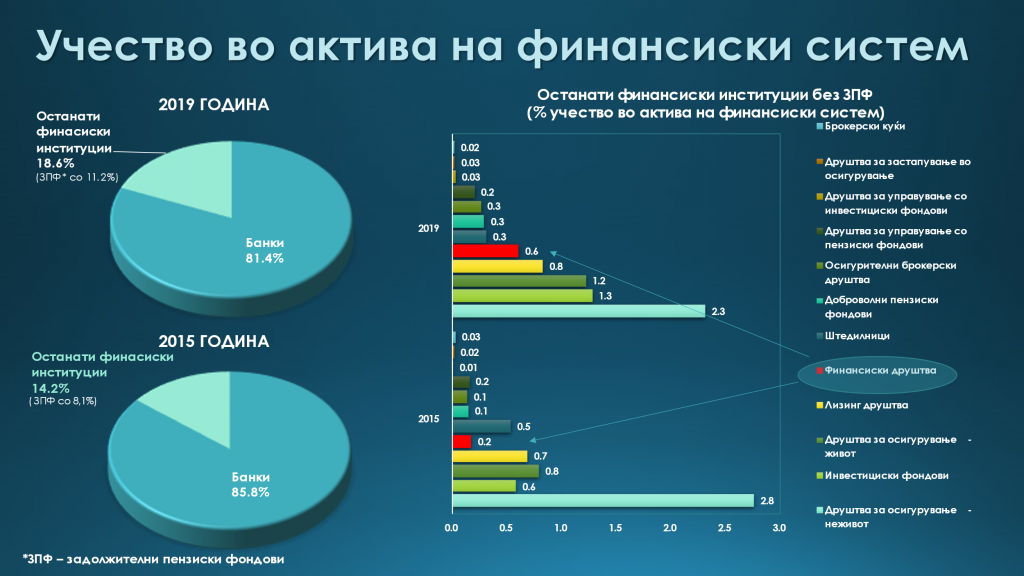 If we analyze only the credit market, the transformation that is happening all around the world has not bypassed the domestic economy either. The rapid growth of the alternative lending outside the traditional channels has been especially emphasized in the last couple of years. The growing credit support of the population and companies by financial companies, which are complementary to traditional lenders – banks and savings banks, indicates that there is a need to increase the level of financial intermediation and the financial inclusion in the domestic economy. Their role is particularly pronounced in the segment of consumer loans, but there is also the support of micro and small companies. The number of clients – physical persons from 14,400 in 2015 reached about 100,000 in 2019, and the number of clients – legal entities increased from 538 to 686 in the same period. At the same time, the use of modern advances in technology, ie digital channels and new business models by many financial companies is a positive step to join the digital age.

The first integral research of this sector entitled as “Financial companies in the Republic of North Macedonia – Sector in expansion before the KOVID-19 crisis“, under the auspices of the Association of Financial Companies, showed that in recent years (2015-2019), assets and loans of The financial companies increased by 4.7 times, ie by 2.5 times, which is the highest growth within the domestic financial sector. Financial companies are important for the credit market, which among banks and savings banks as traditional creditors, also make up leasing companies. The total assets of non-bank financial institutions (NBFI) that provide loans (also including financial leasing) at the end of 2019 reached 193 million euros, which is an increase of 71.4% compared to 2015. Two-thirds of the NBFI’s asset growth is due to financial companies, whose assets have increased cumulatively by 4.7 times and reached 67 million euros at the end of 2019. The highest annual growth of the assets of the financial companies was registered in 2017 (when it doubled), and in 2018 and 2019 the annual growth continued with double-digit rates of 31% and 52%, respectively.

The role of financial companies is significant in terms of increasing the degree of financial intermediation. In the Republic of North Macedonia, the level of financial intermediation measured through domestic credits in the private sector [1] is low compared to the countries of the European Union (EU), and in line with the countries in the region. At the end of 2019, private sector loans from domestic banks and NBFI were 50.1% of GDP, which is far below the EU average (around 86% of GDP in 2019 [2]). Loans to financial companies reached 0.7% of GDP in 2019 (from 0.3% of GDP in 2015).

Despite the still low share in the total lending activity, the rapid growth of loans to financial companies in recent years (by 2.5 times from 2015 to 2019) indicates a high credit demand, ie the need for higher financial inclusion of certain layers of population and small businesses. Banks, despite remaining the dominant creditors of the private sector, in recent years have seen a decline in share (from 97% in 2015 to 96.1% at the end of 2019). This shift largely reflects the increased share of financial companies in the credit market (0.7% in 2015, to 1.3% at the end of 2019). On the opposite, savings banks are losing market share, and leasing companies from 2017 onwards, have moderate growth in support of the private sector. The gross loans of financial companies in the last three years have double-digit annual growth, and at the end of 2019 reached 74 million euros, which is 33.6% of total loans to the private sector by the NBFI.

2. What do the data on the non-banking financial sector for 2020 show? 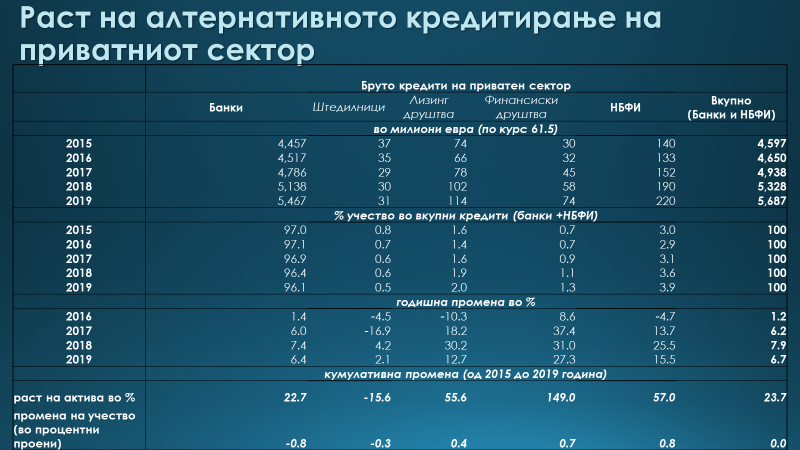 According to the statistics of the National bank [4], at the end of 2020 the total assets of the financial companies are around 5 billion denars, and most of the assets or 89% refer to the receivables from the private sector. Loans given to the population at the end of 2020 are about 3.5 billion denars, while loans granted to companies are about 980 million denars. Compared to the end of 2019, lending to the population registered double-digit growth of 24.3%, while that of companies decreased by 4.6%. This dynamics of lending to the population, despite being slower compared to the previous three years, still indicates the continued support of this sector by the financial companies in conditions of Covid-19 crisis. The double-digit annual growth of the population loans in 2020 was achieved despite the significant imbalance in the second quarter of the year, when financial companies were hit by the government’s anti-crisis measure. However, the data on reduced lending to companies are not encouraging and show insufficient support for this sector. 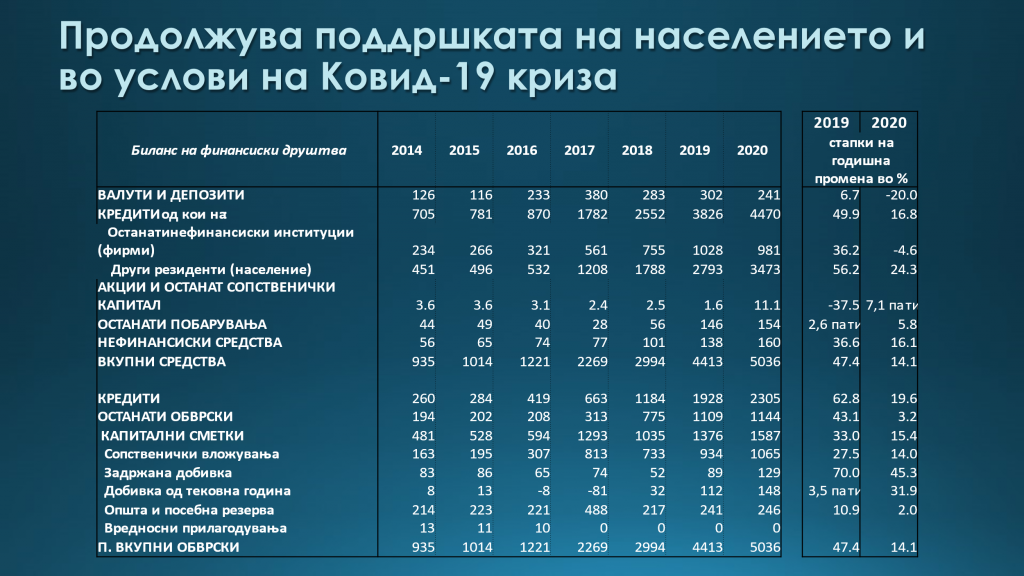 Lending by the financial companies will be very important in the coming period. In conditions when the disposable income of the population is reduced, due to wage cuts, part-time work, layoffs, reduced remittances, etc., the credit demand in small amounts for consumer purposes has the potential to increase. This is shown by the latest trends in this segment, ie the demand for loans from financial companies has increased significantly, despite the fact that it is more expensive than banks. Therefore, financial companies should be seen as an integral part of the credit market, which benefits households and the whole economy.

3. Where do you see the future of FinTech in North Macedonia?

Our country must adapt to the new digital age and must take advantage of modern technology. In my opinion, what needs to be done and implemented in the shortest period is a Strategy that should start by defining clear goals, which are about FinTech increasing the financial inclusion of the population, improving access to finance for micro, small and medium enterprises, increasing the flow of money in the economy or in short, increasing the total power of the economy. At the same time, the operation of the FinTech companies increases the competition and encourages innovation within the traditional providers of financial services, and the innovations are inherently deflationary, ie they have lower prices for financial products and services. We will all benefit from the entry of FinTech.

FinTech will be the “new normal” for which all stakeholders, and I mean business, financial institutions, regulators, the general public, need to build capacity to accept it. The prove that the awareness of FinTech in our country is growing, is the feasibility study from the Fintech Sector Development Survey (Survey) in the country conducted by the National bank, within a project supported by the European Fund for Southeast Europe (EFSE). According to the results, all respondents (220) understand the importance of FinTech for the economy and almost all (89%) justify the need for development of the FinTech sector.

The traditional financial sector in our country is slow in the implementation of new things, but I think that it will increasingly use the opportunities of FinTech services in order to get closer to customers. It is encouraging that in the Survey a high percentage or 72% of domestic banks and other non-banking institutions said that they have initiatives for digital transformation, and 58% that they develop FinTech products and services (mostly banks). From the new technologies, automation is the most common, followed by innovations in payments and analytics using big data analytics. The traditional financial institutions place the regulation as the limiting factor for digital transformation, half believe that the market is not large enough to justify the investment, and less than half (40%) believe that there is a lack of capacity or talent to implement it. The lack of financial resources is more noticeable in non-banking institutions compared to banks, while a relatively smaller number of respondents (20-30%) agree that management resistance is a challenge.

What is surprising is the still low cooperation of existing financial service providers with IT companies or FinTech entrepreneurial companies. This cooperation in the future should be strengthened through partnerships, joint ventures and similar forms of association. At the same time, the majority of respondents from the group of incubators, accelerators and potential investors (71%) believe that the state should encourage the investments in potential FinTech companies. Fund for Innovation and Technological Development should be a solution, which in the future would ease the process of financing small businesses with innovative solutions. They believe that with the adoption of the national strategy, more credit lines would be available for small businesses with innovative ideas and for traditional financial institutions if they encourage innovative solutions.

Open banking in North Macedonia is another segment that needs to be completed. This requires the implementation of best practices and regulations from European countries. Our regulation, ie the Law on payment services and payment systems should be adopted immediately, which will enable open banking and entry of new business entities (Third Party Providers).

However, even at this stage our banks are not passive and are already taking action to open their IT systems with new interfaces and modules for interaction with clients and external companies.

The digital transformation of finances should be observed by regulators. At the same time, greater cooperation is needed between regulators and the FinTech industry. This is clearly shown by the annual survey “Financial companies in the Republic of Northern Macedonia – Sector in expansion before the KOVID-19 crisis” in which a survey of the opinion of financial companies in relation to several important segments was conducted. According to the financial companies, the regulators need to show openness for cooperation with the representatives and drivers of FinTech in our country. The perception of the representatives of the sector is that there is low involvement of the FinTech industry in the creation of new regulations that are important for the sector, the openness of the legislator and regulators for dialogue, consultation and cooperation is low; FinTech industry regulation is not predictable and stable in the long run; the cooperation with the banking sector is low when it comes to transparency and development of the entire financial sector; and the harmonization of the domestic regulations for the FinTech industry with the other Balkan countries is low. FinTech drivers in our country are ready to offer their expertise and knowledge they bring from international, European markets when creating FinTech strategies.

In addition to creating regulations that will enable the development of FinTech in our country, regulators need to be prepared for the new times. FinTech’s entry has benefits for the economy, but it also exposes it to risks. A high percentage of respondents in the survey believe that the greatest risk is the possibility of cyber attacks, financial crime and money laundering. Therefore, an integrated approach of all regulators in all areas is needed in order to minimize the risks.

Finally, in order for the population to accept the digital transformation of finances, it is necessary to have financial and digital literacy. Education on finance and the use of IT technology should be provided in primary school, and for other age groups the support should be provided by financial service providers. In general, we should strive to increase the quality of education towards the new times, and to keep young people in the economy, who are our talents and future potential for economic growth!